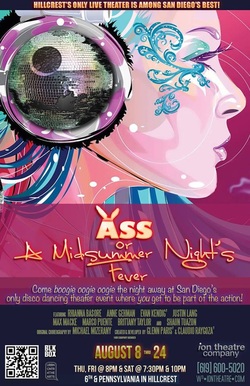 Ass or A Midsummer Night’s Fever

Disco Inferno. The Hustle. I Will Survive. Join ion theatre in August when it unveils Ass or A Midsummer Night’s Fever – a bold, new, audience-immersive cabaret – inspired by one of Shakespeare’s most enduring comedy-fantasies: A Midsummer Night’s Dream. Guests are encouraged to don their disco-dancing best as they join a cast of motley merry-makers based on the Bard’s original star-crossed lovers lost in the deep of a magical forest. Infused with true 70s flair, and including special appearances ranging from Star Wars denizens to Studio 54 superstars, audiences will join the action and dance the night away to many of the era’s most boogie-inducing anthems.