News, Info, Updates & All the Buzz About Shaun!

What Critics are Saying: 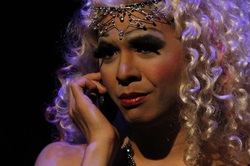 "Tuazon is certainly worth a look or two in this Carrie Klewin-directed piece—he’s a confident kid with good range, and he’s very funny playing a clueless senator who can’t stop bobbing his head as he weaves his way around the foster-care issue."
- Martin Jones Westlin, "Fostering Reality," San Diego City Beat

"But it’s Tuazon’s 'Michael' that gives the show its heart and fulfills Circle2dot2’s mission to create theater from the stories of our community. This story is based on the life of local drag queen (and co-choreographer) Anthony Diaz, aka Grace Towers. Tuazon is indefatigable, poignant and extremely talented – and looks great in a dress. Or less."
- Jean Lowerison, 'Deconstruction of a Drag Queen,' San Diego Gay Lesbian News

"Every performer did a wonderful job and was wonderfully cast. I really enjoyed Shaun Tuazon’s performance, this is the third time I have watched him on stage and he always does a fantastic ingénue. His sweetness, vulnerability, confusion and barely repressed excitement when dancing was perfect for his role as Michael and he really shone in his dance numbers as Sunny Peaks."
- Paola Hornbuckle, 'Deconstruction of a Drag Queen,' ArtsNFashion Magazine

"I’ve admired Tuazon ever since I saw him play the title role in Zanna, Don’t some years ago. He was also in Diversionary’s recent production of Dooley."
"[Shaun Tuazon is] facile, adept, believable entertainer."
- Charlene Baldridge, 'Deconstruction of a Drag Queen,' Charlene and Brenda in the Blogosphere